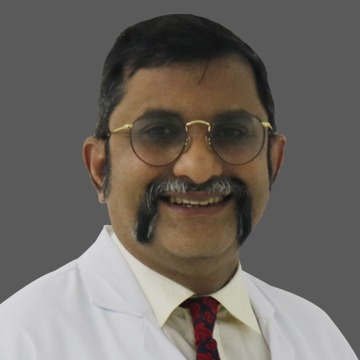 Dr. Venkata Kiran KVSN finished his MBBS from Andhra Medical College, India in 1993. He completed his post-graduate degree DNB in Orthopaedics from The National Board of Examinations, New Delhi, India in 2000. In 2015, he received his fellowship in Spine Surgery from St. Galen Hospital, Switzerland in 2015.

Dr. Kiran obtained his 2 years Arab Spine Diploma from UAE, and became affiliated with the Royal College of Surgeons – Ireland and United Kingdom, North American Spine Association, University of Basrah, Iraq in 2019. He is currently pursuing Masters course in Spine Surgery in the UAE, of which he completed the 5th module in 2019.

Dr. Kiran started his medical practice in King George Hospital, India. He became a civil assistant surgeon in 1998. In 2014, he moved to UAE where he worked as an Orthopaedic Surgeon in Abu Dhabi. Since 2015, he is pursuing a sub-specialty interest in treating patients with spine and disc complaints and has helped countless patients in the UAE to date.  In addition, Dr. Kiran treats and manages osteoporosis, joint pains and general trauma amongst various age groups.

Dr. Kiran has attended several national and international seminars, conferences, workshops to his credit. He has authored 3 publications, one of which is on "retrocalcaneal spur excision by a lateral approach" – published in JEMDS in 2013.  Currently, he is working on several Orthopaedic-related health projects for the community.