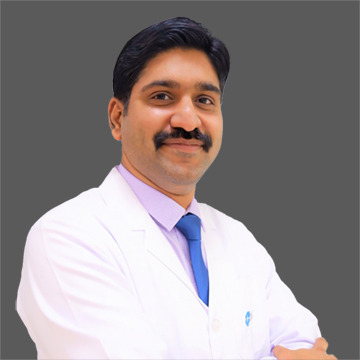 Dr. Sandeep V Nair has completed his MBBS in 2005 from Government Medical College Thiruvananthapuram, Kerala, India and MD General Medicine from Moti Lal Nehru Medical College, Allahabad under King George Medical University Lucknow, Uttar Pradesh, India in 2011. He acquired DNB in General Medicine awarded by National Board of Examinations, New Delhi in 2013.He was awarded MNAMS by the National academy of Medical Sciences in 2014.He passed the prestigious MRCP (UK) awarded by the Royal College of Physicians, London, UK in 2014.

He worked as a physician in MGM Muthoot Medical Centre Kozhenchery, Pathanamthitta for a year and then moved to Don Bosco Hospital North Paravur, Ernakulam, where he worked as a Consultant Physician and Diabetologist for 4 years.

After his stint as a physician for 5 years, he continued his pursuit for sub-specialisation and completed DM Gastroenterology from Government Medical College Calicut under Kerala University of Health Sciences in 2019. He then joined Medical College Calicut as an Assistant Professor for 6 months. He was awarded DNB Gastroenterology from National Board of Examinations, New Delhi in 2020.Then he worked at Sree Narayana Institute of Medical Sciences, Chalaka, North Kuthiyathode, Ernakulam as Assistant Professor, Gastroenterologist till Jan 2021. He underwent training under Dr. Rajesh Sainani at Jaslok Hospital, Mumbai, India for GI Motility Studies, Manometry and Biofeedback Therapy.

He underwent ERCP training at Ansh Clinic, Gujarat, India under the mentorship of Dr. Sanjay Rajput a pioneer in the field of Advanced Therapeutic Endoscopy. He was working as Assistant Professor in the Department of Gastroenterology and Hepatology at Amrita Institute of Medical Sciences and Research Center, Kochi till March 2022 before moving to NMC Specialty Hospital Al Ain.

Dr. Sandeep V Nair has 16 years’ experience in the medical field of which 3 years as a Gastroenterologist. Some of the services provided by the doctor are Diagnostic and Therapeutic Upper GI Endoscopy, Colonoscopy, EVL, Polypectomy, ERCP, Oesophageal and Anorectal Manometry, Bio-feedback therapy, Capsule Endoscopy, Enteroscopy.

He can speak English, Malayalam and Hindi.