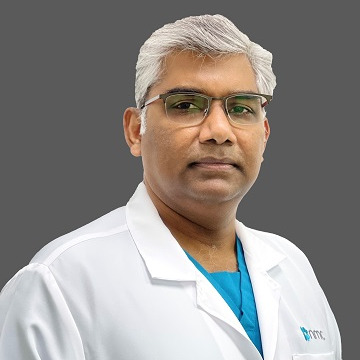 Dr Murali Subramaniam brings with him over 25 years of experience in Vascular Surgery. He was a Consultant Vascular Surgeon with the National Health Service (NHS) United Kingdom for over six years. Dr Murali was instrumental in setting up an award-winning, multi-disciplinary diabetic foot clinic credited with a significant reduction in major amputations. In addition, he introduced a novel minimally invasive treatment for varicose veins. Dr. Murali completed his MBBS from Madras Medical College, India. He completed his basic surgical training from the University of West Indies and was awarded FRCS from Edinburgh, UK. He worked as a Research Fellow at the Western Infirmary, Glasgow, on stem cells nominated for the prestigious Medawar medal by the British Transplantation Society.

Dr Murali was recently awarded the clinical excellence award and is actively involved in research, audits, and multiple quality improvement projects. His particular interest is in limb salvage in diabetic patients. His wide-ranging expertise includes treating aortic aneurysms, carotid surgery, vascular access for dialysis, varicose veins, lower limb bypass and vascular trauma. He holds a US patent for a retractor he has designed and taken to market. He has a keen interest in the history of medicine and surgery, primarily originating from the sub-continent and has presented on several forums.

He was awarded a national training number in Scotland, culminating in the intercollegiate FRCS in General and Vascular surgery. Dr. Murali further completed an Endovascular Fellowship at the University College Hospital Galway, Ireland. He was awarded CCT (Certificate of Completion of Training) by the General Medical Council (GMC).