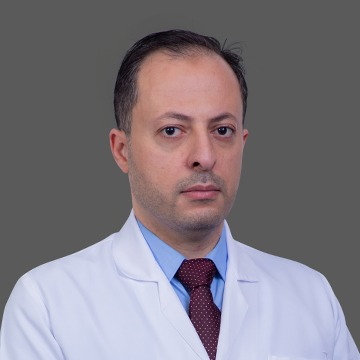 Dr. Aref Hammam started his residency training program in one of the biggest hospitals in Jordan in 2007.  In 2011, he qualified for the Board of General Surgery by the Jordanian Medical Council.  Then in 2018, he became a Fellow in Minimal Invasive Surgery at the World Laparoscopic Hospital.

Dr. Aref started his clinical practice at the Ministry of Health in Jordan in 2001 for 10 years, then became a full-time Specialist in General Surgery in a private hospital in his home country.  In 2012, he moved to the Kingdom of Saudi Arabia (KSA) where he became Consultant and Head of Surgery Department in a government military hospital based in Al Riyadh for 6 years.  In 2017, he became a registered Consultant General Surgeon in Dubai Health Authority.  A year later, he became a registered Consultant General Surgeon in Department of Health - Abu Dhabi.

To his credit, Dr. Aref is a member of the society of American gastrointestinal and endoscopic surgeons (SAGES), Association of Laparoscopic Surgeons, and Jordanian Medical Association.  He has attended local and international trainings in Saudi Arabia, Lebanon, Jordan, India, and the UAE.