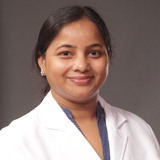 Dr Sunita Gupta has obtained her MBBS from one of the premier medical institutions in India named G.S.V.M. Medical College, Kanpur in year 1999 and went on to pursue her MS in Obstetrics and Gynaecology in year 2001 from the same institution. She also obtained her Fellowship in Minimally Access Surgeries from World Laparoscopy Hospital, Gurgaon and Training in advance Gynaecolologic laparoscopic and hysteroscopic surgery-from Cochin Gynaecological Endoscopic and Infertility Training Centre, Pauls Hospital Kochi. She also obtained membership of royal college of Obstetrics and Gynaecology (MRCOG), United Kingdom in 2021.

Dr Sunita joined Subharti Medical College and associated tertiary care hospital, Meerut, India in 2006 as assistant professor and promoted as associate professor in 2011 till 2015. She is an accomplished Obstetrician and Gynaecologist as she has vast clinical and teaching experience.

She has almost 21 years of clinical experience in field of Obstetrics and Gynaecology. She has outstanding ability to provide care with holistic approach, treating the patient with emphasis on physical, emotional, and social wellbeing.

She had several national and international publications and paper presentation to her credit and has additionally participated as guest speaker and chairpersons in various state & national level conferences. She has trained junior colleagues, postgraduates, interns and undergraduate students to become accomplished doctors.