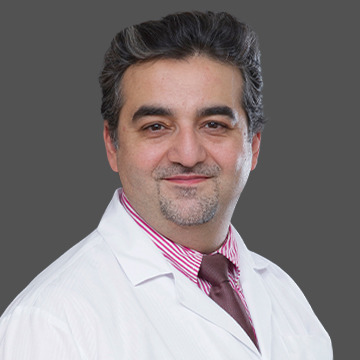 Dr. Batal is qualified with degrees in Orthopaedics Surgery and Traumatology, General Surgery, Accident and Emergency, Bachelor of Medicine and Bachelor of Surgery (M.B.Ch.B) in 1991. He received the Facharzt Degree in Orthopedics Surgery and Traumatology in 2010 and the Facharzt Degree of General Surgery (2009) from Westfalen-Lippe in Münster, Germany. He also completed the Notarzt Degree in Accident and Emergency (2007) in Münster, Germany, and the Notarzt Degree (2007) from Dortmund, Germany. In 1997, he completed several courses and a workshop at the Faculty of Medicine in Baghdad University, Iraq. Dr. Batal completed his internship in 1998 at King Abdulaziz University Hospital, Jeddah, Saudi Arabia.

Dr. Batal worked as a Consultant in Orthopaedics and Traumatology at Dr. Soliman Fakeeh Hospital, Jeddah (2013 – 2016), and at the Vital Klinik, Bad Driburg (2012 – 2013). He was also employed as a Consultant in the Orthopaedics and Trauma Department at Sankt. Martinus Hospital, Olpe (2012), a Specialist Doctor in Trauma/Orthopaedics Department at St. Lukas Hospital (2010 – 2012), and a Senior Resident in General Surgery Department (Visceral-Thoracic Injury) at St. Vencent Hospital, Rheda-Wiedenbruck (2007 – 2010). Dr. Batal was a Resident Doctor in the General Surgery Department (Visceral-Vascular Accident) at Ev.Krankenhaus Bielefeld-place John (2004 –2007), in the Orthopaedics Department at the University Hospital Aachen (2001 – 2004), and at the Saudi German Hospital Jeddah, Saudi Arabia (1998 – 2000).

Dr. Batal is a Trauma and Orthopaedic Consultant offering over 16 years’ of extensive experience in effectively handling full clinical orthopaedic practice and research as well as administrative responsibilities while taking life-changing decisions. He is a Specialist in examining, diagnosing and treating/prescribing course of treatment plans and surgery to patients suffering from sports injuries, disorders, malformations and diseases/injuries pertaining to the musculoskeletal system.

Dr. Batal’s key skills are in Orthopaedic Procedural Expertise with hands-on experience in performing numerous orthopaedic and traumatology operations, including arthroplasty (knee and hip joint replacement), all types of trauma (adult and paediatric), arthroscopy (knee and shoulder), ACL reconstruction and corrective surgery (foot and hand) along with Bankart repair, and subacromial decompression. Dr. Batal has several publications and presentations to his name. He has a proven record of success in conducting various research work including ‘The Use of Palmaris Longus Transfer Technique in Brown Syndrome Superior Oblique Tendon Sheath Syndrome: A Novel (Batal Brother Technique)’, Journal of American Association for Paediatric Ophthalmology and Strabismus, Volume 13, Issue 1, Pages e2-e2. 2010. He successfully presented a new surgical technique using the autogenous tissue namely that of Palmaris Longus Tendon – one of the most commonly used donor tendons in orthopaedics and reconstructive surgery – for lengthening the superior oblique tendon in cases of moderate to severe Brown Syndrome. He proactively delivered a lecture on ACL reconstruction during weekly grand round meetings at DSFH, Jeddah.