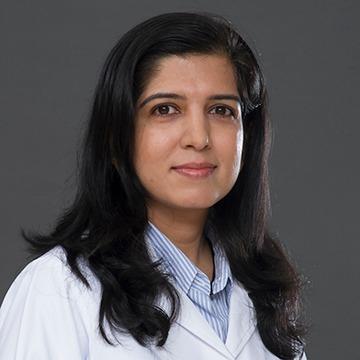 Make an Appointment
Dr. Nisha Ramdas Chandnani completed her MBBS from Saurashtra University, Gujarat in 2006. She subsequently did secondary DNB in 2011 and Longterm Fellowship in Vitreo Retina from Eye Research Center, Chennai in 2014. She is a FRCS from Royal College of Physicians and Surgeons of Glasgow. Adding to her expertise she had attended short term course in Retinopathy or Prematurity and Paediatric Retinal Disorders at Aravind Eye Hospital, Coimbatore, India.
Dr. Nisha started her career in the year 2011 as Ophthalmologist at Dr. Agarwal’s Eye Hospital, Chennai and continued in the same post till 2012. In the same hospital, later she joined as Consultant in the Department of Vitreo Retina from 2014 before she joined NMC Specialty Hospital, Al Ain. During her term as a Vitreo Retina consultant she was involved in training of fellows in the field of surgical retina.
To her credit she is a member of Vitreo Retinal Society of India (VRSI) and All India Ophthalmological Society (AIOS) and is also registered with the General Medical Council, UK.
Her prime area of interest is in Vitreo Retina Surgeries. She is well versed in management of various complicated Vitreo Retinal diseases, cataracts and glaucoma. She has contributed in 3 indexed scientific publications, and has presented at national level conferences in India.
She is fluent in English, Hindi, Gujarati, Tamil and Sindhi.