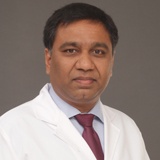 Dr. Arun Kumar is a Consultant General and Laparoscopic Surgeon at NMC Royal Hospital and is associate with the hospital since its inception in 2016. He has over 20 years of distinguished experience in General and Laparoscopic Surgery. He has obtained his master’s degree from the prestigious All India Institute of Medical Sciences (AIIMS), New Delhi. He is a Member of Royal College of Surgeons in Edinburgh.

He started his career as a Senior Resident in the department of Surgery at All India Institute of Medical Sciences, New Delhi, India. He worked in AIIMS performing advanced Laparoscopic & Open surgeries including Open & VATS Thoracic surgery. He then joined Columbia Asia Hospitals in Bangalore as a Consultant Surgeon. He worked at Columbia Asia Hospitals for over 10 years while performing almost all General & Laparoscopic surgeries.