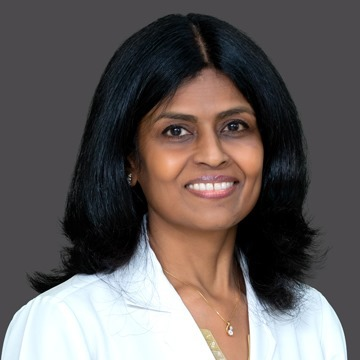 Dr. Sumitra Reddy completed her MBBS in 1997 and DMRD (Diploma in Medical Radio-Diagnosis) in 1999 from Stanley Medical College, Chennai, India. She completed her senior residency at Barnard Institute of Radiology, Madras Medical College from 1999-2000. She later obtained the DNB (Diplomate of the National Board) in 2003.

She joined the department of radiology at Apollo Hospitals, Chennai in October 2001 and had a long stint there till October 2014. Her skills include general abdominal ultrasonography, doppler of the abdomen and extremities, ultrasound of the breast and thyroid; CT and MR imaging of the whole body. Her special interests include chest and musculoskeletal imaging. She also performs basic image guided procedures as FNAC, biopsy and drainages.

Dr. Sumitra has taught numerous postgraduate students in the department and was academic coordinator; scheduling and teaching classes for radiology and interdepartmental meets.

She regularly attends conferences and CME programmes and has given guest lectures and scientific presentations. She has published a case report on Chiari II malformation with Vanishing Cerebellum. Another on Pulmonary Capillary Hemangiomatosis awaits publication.

She is fluent in English, Tamil, Hindi and can converse in Bengali.