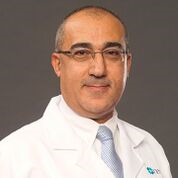 Dr. Sleiman Gebran joined Mafraq Hospital, abu Dhabi from 2009 till 2016, where he occupied the position of Consultant Paediatric Surgeon and Chief of Division.