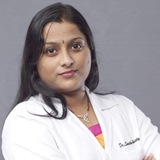 Dr. Savitha started her career as a Medical Officer at the A J Shetty Institute of Medical Sciences, Mangalore, Karnataka, India. After that she joined the Department of OBG, Kasturba Medical College Hospital, Mangalore, Karnataka, India as a Resident. In 2008 she became the Senior Resident at the same institute. After her time with Kasturba Medical College, she joined NMC Healthcare in 2009 as a Registrar – OBG at NMC Specialty Hospital, UAE. She completed Masterclass in Obstetrics and Gynecology Ultrasound from ISUOG in March 2021, and Diploma in Minimal Invasive Surgery conducted by University of Schleswig Holstein ( Kiel, Germany ) in January 2021.