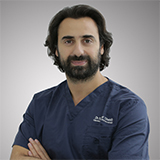 Dr. Samer Cheaib specializes in high-risk pregnancies as well as twin and triplet pregnancies. He is also an expert when it comes to complicated pregnancies, cervical incompetence, rescue cerclages and many aspects related to preterm labor and recurrent pregnancy losses. He closely follows up with his patients and does his best in achieving a healthy outcome for the mother and baby.

Dr. Samer has the privilege to deliver babies in the following hospitals:

Membership: The American Congress of Obstetricians & Gynecologists and the American Medical Association.

Dr. Samer earned his Medical Degree from the University of Baghdad in 2002 before graduating from the American University of Beirut in 2008 specializing in Obstetrics and Gynecology. He then completed a three-year fellowship in Maternal Fetal Medicine at Inova Fairfax Hospital in Virginia, USA, which is considered one of the most reputable maternity hospitals in the USA.