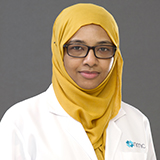 She completed her Internship training from September 2008 till September 2009
Dr. Maha had worked in different subspecialty in dental Hospital such as Operative Dentistry (Conservation), Pediatric Dentistry, Oral- maxillofacial Surgery, Periodontics, Prosthodontics and dental Public Health in Khartoum city in Sudan.

Dr. Maha Awad worked as medical officer in Omdurman Military Hospital, Khartoum, Sudan from November 2009 till June 2010 and as GP dentist from June 2011 till June 2012 and from September 2012 till April 2013 in the same hospital.

She had received Post Graduate Diploma in Research Methodology and Biostatistics from University of Medical Sciences and Technology (November 2012 – May 2013) in Sudan.

She worked as GP dentist in Medical Laser Centre/Dental – UAE, Abu-Dhabi from September 2014 till April 2016.

She had attended courses in endodontics, veneers and crown and bridge.

She is fluent in Arabic and English.