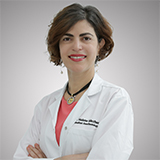 Dr. Helene is a Consultant Anesthesiologist with over 25 years of experience in multiple aspects of Anesthesia. She joined Fakih IVF Dubai in April 2014. Previously, Dr. Helene was Consultant Anesthesiologist at Saint Charles Hospital, Baada, Lebanon, in the restructure Anesthesia Department, working closely with Cardiac Anesthesia and Bariatric Surgery. From 2001 to 2011 she worked primarily in Pediatric Anesthesia at Sainte Therese Hospital, Hadath, Lebanon. Prior to this, Dr. Helene worked at the Central Military Hospital in Bararo, Lebanon as an Intensivist where she organized and launched the Intensive Care Department.

Education: Dr. Helene has been dedicated to continuing her education since receiving her Bachelor's Degree in General Medicine from Saint Joseph University in Beirut, Lebanon in 1989. From 1989 to 1994, she studied at Faculté de Médecine in Montpellier, France receiving a diploma in Speciality Anesthesia - Resuscitation. Next, 1994 to 1996, Dr. Helene studied at Faculté de Médecine in Nice, France and earned a diploma in Pain Management. From 2004 to 2006, she completed her MBA in Health Management at Saint Joseph University, Beirut, Lebanon. Dr. Helene then went on to become a registered, certified auditor for ISO. Most recently, she completed a University Diploma in Echo-Guded Anesthesia at Lebanese University.