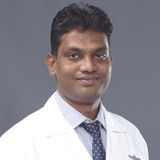 Dr. Anil also has a publication to his name. The publication was on Non-invasive ventilation after extubation in patients with chronic obstructive airways disease.