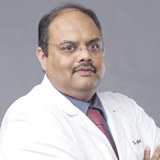 Dr. Ajit Kumar had completed his D. M. in Neurology from the National Institute of Mental Health and Neurosciences (NIMHANS) in Bangalore in 1999. He subsequently completed a two year fellowship in movement disorders at the Pacific Parkinson’s Research Centre at the University of British Columbia in Vancouver, Canada.

Dr. Ajit  was Assistant Professor of Neurology at St. John’s Medical College, Bangalore and later became Consultant at the Wockhardt Brain and Spine Hospital in Mumbai, India. His areas of expertise include Parkinson’s disease and related movement disorders, stroke and electrophysiology.

Dr. Ajit  is a life member of the Neurological Society of India and Indian Academy of Neurology and has 30 publications, of which 16 are peer reviewed, indexed, international publications.